Quite possibly the saddest thing I have seen this year…

The BBC are running an excellent series of programmes on BBC2 called ‘This world’. I’ve been watching the series for a couple of years now, and tonight’s show (broadcast on October 24 2006) was particularly harrowing. 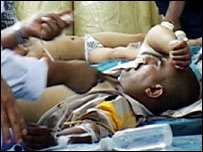 It was filmed by an Iraqi doctor who tried to show the darker side of daily life in Iraq, centered in a hospital. By filming, the doctor puts his life and those participating in the film in danger, not an idle claim as demonstrated by the number of people who are unwilling to be filmed for fear of being executed.

The sheer scale of terror and indiscriminate violence as Shia and Sunni communities turn against each other is heartbreaking. As is the courage and disbelief of ordinary civilians caught up in the downward spiral of vengance and violence.

This courage is displayed in extraordinary moments, a six year old boy with tubes inserted into his lungs (directly through his chest) to drain them of blood – with no anaesthetic, and no proper equipment. The man answering his friends phone with a casual ‘hello, how are you, Abed is in hospital’, whilst his friend lies in a hospital bed having being wounded in a car bomb. The shrieking of a Shia woman injured in a bombing to ‘bring back Saddam’, arguing nothing could be worse than ‘brother killing brother’. The doctor (who filmed it all) turning to camera having had to choose between saving the life of a young woman and her unborn child, killing the baby, and saying he could no longer do this.

Comments from ordinary Iraqi civilians was the only positive thing that stood out for me. So many unable to comprehend how and why people are doing this, those who had lived peacefully as brother and sister intent on killing and destroying. Sooner or later one believes their voices will be heard.

Although this is a harrowing programme, I can’t recommend it enough to anyone interested in politics or the wider world (hopefully everyone who reads this blog…) It shows a picture of Iraq far removed from the sanitised fair we consume in our daily news broadcasts, which remains uncaptured and criminally uncovered by the mainstream media. It also makes a compelling case for pulling foreign troops from the country carefully, for fear of tipping it into open civil war.

You can view the programme online by visiting the BBC website:
http://news.bbc.co.uk/1/hi/programmes/this_world/6070286.stm